Here we are again, somewhere we had never been before! Well Colonsay was plan A, but with strong winds for most of the week we found ourself at Strensham services on the M5 consulting the SW sea kayaking guide book and Magic seaweed for plan B.

Force 4 from SW and 2.0m swell from the West forecast. Our 11.30 start allowed the tide to turn and Coombe Martin soon left behind as we headed East, wind and swell and tide with us. Apparently we did better than Meatloaf as ‘3 out of 3 ain’t bad’ The north Devon Coast is not renowned for its wild camping sites. In fact we found none so it was fortunate that we had opted for the 18km a day trip to Lynmouth. The coast was adorned by very steep wooded slopes, up to 250m, amongst which shockingly fractured vertical crags  maintained the scenic interest.

Just past Blackstone point we pulled in for lunch to allow the tidal flow to gain full force. Amongst the rocks Phil found no living thing apart from the odd limpet. Soon we passed the Mare and Colt rocks and onto confused water at Highveer Point where overfalls tried to confuse us. Woody Bay proved much calmer protected from wind and offered enticing glimpses of the castle like rock towers in the ‘Valley of the rocks’.

Lines of surf over the rocky reef at Crock point required  precise timing and and a quick sprint to avoid bongo sliding onto the boulder field, that had been deposited by the the river Lyn in 1952 flood. The trip ended with 2ft surf into a very small pool adjacent to the groyne on the beach. Oops! it was low water so a 300m portage ( using wheels ) to the harbour and a cream tea.

After sorting the shuttle to Minehead, Force 4 from SW and 1.6m swell from the WNW forecast.

Oops It was low water again! so a 300m portage (using wheels) to the pool by the groyne.

Another 11.30 start. Foreland point, 3km, was soon reached, with 2kts of tide running agains us. Paddling furiously made no progress, whilst 10m towards the cliffs, but parallel, Mike sat still in the eddy. We sneaked up under the cliffs, just outside the  break line. Two moored fishing boat confirmed the tidal flow was against. Another early lunch until the two boats swung around. The cliffs of a similar nature, but all the more impressive for the sun. A seal poked his nose at our presence. Even 2 gulls and a cormorant were spotted. Still no wild camping sites.

Across Porlock bay, the NW1.4m swell increased and winds blew us into some most irregular overfalls off Hurlstone point and some anxious moments.

Now wind, swell and tide directly behind, saw us make 4knots to Greenaleigh point, and a short break on a remote beach.

Finally Minehead appeared, but the tide was out again! We declined a muddy wade in favour of a surf onto the steep boulder shingle below the lifeboat station.

Always forecast as a poor day, Force 6 and rain forecast so plan B part 2 was invoked. Drive to The Lizard. We took our time, on arrival we dropped off a car in Mousehole, a brisk hike to Lizard point. Strong winds, sea mist and the general gloom didn’t make for a pretty picture, with lots of sharp rocks and skerries being lashed by black seas and grey foam at least 500m out. However, after a pint or two in The Witches’ Ball, we felt more confident and went to bed happy.

We awoke to an  was eerily still morning, with the wind swinging round to the North and dropping. We launched from Coverack onto a calm sea, but remembered the stories of round Britain kayakers having boats destroyed. In the event rounding Lizard point, England’s most southerly point was very straightforward; we negotiated the reefs just after slack water, with the cliffs shielding us from the wind.

From there, it was a gentle paddle up the coast to Kynance for a brew and a sandwich. Then back in the boats to Mullion Cove for yet more scones and cream tea. Mike tried to make conversation with the cafe owner; “ Ten POUNDS!…for a crab SANDWICH?”Which didn’t go well, so we jumped back in the boats and headed for Church Cove and our only wild camp of the trip.\

In theory, this  was supposed to be the easy day, but it didn’t feel like it; cold but sunny first thing, we packed up and raced round the scenic bits of cliff and the beaches at Praa Sands, stopping at Porthleven for elevenses. Not much tidal assistance, but nice paddling past isolated beaches and Poldark’s mining towers.  As we rounded the corner into Mounts Bay, so pretty, we encountered a consistent headwind all the way to St Michaels Mount.

Then beyond another 3km into the headwind to Penzance and Newlyn. Only travelling at 4km per hour made along day. After that we enjoyed a gentle couple of km down the coast and into Mousehole harbour. A long 27km day, and then another couple of hours doing the shuttle.

A lot of planning and thoughts go into a Land’s End trip.

We needed to start from Sennen as the wind would be behind us. However the flow inshore was running in the opposite direction to the offshore current, it gave us a 3 hour window to round Land’s End

Driving down to the village of Sennen all looked OK but then again, it was from a distance. Getting changed in the car park there was a little tension in the air as 7ft waves crashed over the rocks in the bay. The local fishermen questioned our thoughts. Is this sensible? We made plan, so, yeah- of course. Have you got that flare? Put it in – Hmmm. The first few strokes around the breakwater always feel the worst, but after a few waves crashed into the boat the 5 foot waves all seemed to flow under us nicely and become soon the ups and down motion seemed almost “normal”. We paddled south and soon, very soon, Lands End approached. 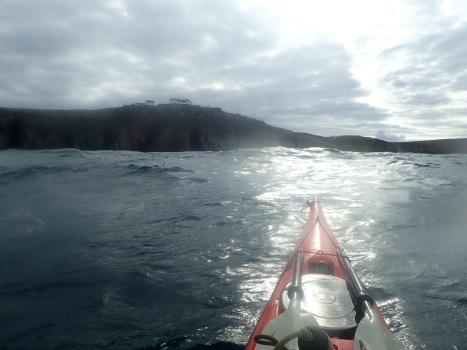 Inside or outside the skerry, we decided to outside and headed out away from the cliffs until it looked feasible.

The ebbing tide forced our choice, thorough the race we went, fortunately only 150m of overfall chaos; again the first few paddle strokes got us settled, until that “normal” feeling retuned. Having passed the  waves gradually settled although still could not relax fully. ‘What are you doing up there’ was a thought that invade the mind as the bottom of each other boats were frequently seen. Got to watch where the waves were coming from, none seemed to be breaking, though the wind produced white tops.

The next headland was Gwennap Head which as Mike pointed out, rather controversially, really was the true Land’s End but without the crowds. More confusion and overfalls. Soon we reach dates more sheltered cove at Portgwarra, where  when exchanging high5’s Phil inform us, that was the most exciting thing he had done this year- and the most scary. Now with following wind, the headland with the Minnack outdoor theatre near Porthcurno slid by and Logan rock increased the swell.

Just before Tater-Du lighthouse a a heavy shower delivered force 5 to increases wave height but aided our progress. At last were round, feeling good. At Lamorna we took break and found a crab sandwich for £12. We paddled up to Mousehole relaxing in the sunshine, to be entertained by a seal who seemed intent on investigating us in his own  leisurely way.

A yes the obligatory cream tea never far away.

It was not a nice thought traveling home and the thought of sitting in a traffic jam was very unappealing. Hatched a plan to paddle in the morning and head home in the afternoon. Thanks to Phil for sorting out our shuttle before he headed home. We found a nice starting point in a small bay just south of Godrevy point. Straight off the beach into the sun and around an island with a pretty lighthouse, on Godrevy islands. Unable to split the isles due to an excess of breaking waves, we rounded them instead. With the west wind behind us traveling from Naval Point at the North end of St Ives Bay to Portreath. Along the once more continuous 70m, impressive cliffs and coast line. Rockhopping, well not really rockhopping more like skerry/island hopping, but still full of atmosphere as we weaved are way along the coastline. Inside Crane Islands required precise timing in the tricky swell. Samphire islands emphasised the two sweets, one from West one form NW.

Passing Gull rock was interesting and lead us to the harbour, a really strange affair, at first the entrance could not be seen and then the was bordered by a rock wall and a long corridor into the main harbour, a waiting car and yet another convenient scone shop.

Lots of overnight rain meant most rivers were too full for comfort, but some smaller spate runs were looking good, so four of us paddled the Leith; Cumbria’s least well-known Grade 3. Phil, Brian,Mike H And guest Peter.

Stuart Miller’s guide gives zero stars, and emphasises the number of sheep fences which require portage, but Mike had run the river in February and said the fences were gone or had gaps, but we still took a cautious approach. As it turned out, the fences weren’t an issue, but there were several river wide trees which needed a portage, and a lot of low hanging branches to sweep over, under or around, and lots of small footbridges which we had to duck under. But the paddling was good, with continuous interest,  some lovely drops and slides, and the weather stayed kind, with sun and gentle breezes. No crab sandwiches for lunch, but cakes and coffee at the local garden centre, which was a bit upmarket for us; “£7000 for a PELICAN!”