With no water in the rivers, we decided the tides looked good for a sea paddle.

A plan was hatched to do the North End of Walney from the ferry pitching’s on the East side of the channel round the top and down the west side to Earnse bay.

As New Year’s eve approached the forecast was for sun and light winds, it seemed too good to be true.

Rob, John S and Mark decided to do a full circumnavigation of Walney and Paul & john P a guest from Duddon CC would join us for the original plan at ferry pitching’s

We meet at 8.30 and the plan was to trolley down to the water for 9.00, But we were distracted as we were talking to 2 local residents.

As forecast, it was a bright morning with a very light wind.

In just over 2 hours and we were at Piel Island, We had a good Brunch and a catch up with king and Queen Steve and Sheila Chattaway and some of the cottage residents. 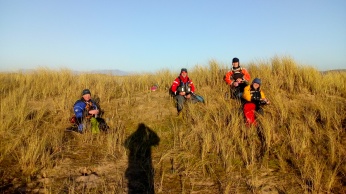 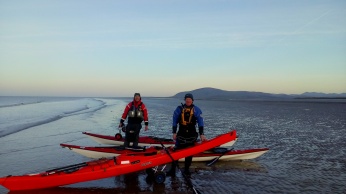 At 12 15. We were off again, this time making full use of the fast north going tide. A quick pit stop at ferry pitching’s to pick up our 2 additional padddlers

In no time at all we were at the northern tip of the island and the final brew stop and a bask in the unusually warm winter sunshine.

Then off on the last leg arriving back were we started 6 hours earlier, the GPS showed we has covered 20 miles